OK, maybe not so much with the squeaking

...thou arch-heretic in pronunciation; thou pitch-pipe of affected emphasis; thou carpenter, mortising the awkward joints of jarring sentences; thou squeaking dissonance of cadence; thou pimp of gender...

Scottish poet Robert Burns, in a 1791 letter to a critic, well worth reading in its entirety. Via Rosanne Cash.

President Bill Clinton, in an interview in the January 2012 Esquire

"One of the real dilemmas we have in our country and around the world is that what works in politics is organization and conflict. That is, drawing the sharp distinctions. But in real life, what works is networks and cooperation. And we need victories in real life, so we've got to get back to networks and cooperation, not just conflict. But politics has always been about conflict, and in the coverage of politics, information dissemination tends to be organized around conflict as well. It is extremely personal now, and you see in these primaries that the more people agree with each other on the issues, the more desperate they are to make the clear distinctions necessary to win, so the deeper the knife goes in."

The cream-filled march of time

"It's safe to say that no one has ever done a sequence like this in any other film. At least not with a pig."

Jim Henson, in a memo to his staff, regarding shooting the water ballet "Piggy pool" sequence for The Great Muppet Caper, involving, among other preparations, a bubbleless underwater breathing apparatus for puppeteer Frank Oz, a full-size pig costume for the child/actor performing long shots of Miss Piggy diving into the pool, a water choreographer, twelve non-pig swimmers, and a special 50x80x8-foot pool built for the shoot on a soundstage outside London.

It pains me even less to skip it altogether 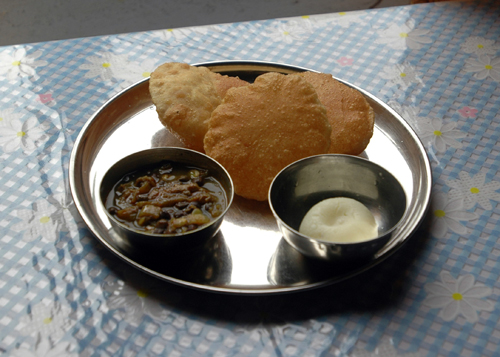 Above: a typical breakfast of curried vegetables, bread, and rasbari

"How's the food?" is a question I've been asked a couple of times, and the answer, in a word, is "excellent." Business hours at the hospital are 8:30 a.m. through 4:30 p.m. Sunday through Thursday, and 8:30 to noon on Friday, and three meals a day (all seven days a week) are provided for short-term expatriates such as myself and other visitors. Breakfast is brought around to our accommodations between 7:30 and 8:15 a.m., and lunch (noon to 1 p.m.) and dinner (7:30 to 8:30 p.m.) are served in the dining hall on the other side of the hospital campus. Our quarters/cabins/flats also include kitchens furnished with a small refrigerator, a propane stove, a few basic utensils, and some coffee/tea basics, and we could certainly do more of our own cooking should we so desire, but it will come as no surprise to those of you who know my non-Nepal cooking/eating habits to learn that I haven't made much use of my kitchen, and just like home, that includes, to date, not having turned on the gas to the stove. Also found in each kitchen is a huge water filter jug, sort of a Britta pitcher on steroids, with three Katadyn filters in it, providing drinkable-for-Westerners water, which has worked fine for me as long as I don't think too much about what's accumulating in the top filtered-out portion of the jug. Dr. Grahame reports that, out of long habit, his family still boils all their drinking water in addition to filtering it, and if I had to do that to get good drinking water, yes, I'd turn the gas on, but until then, no need for all that knob-turning hassle.

[This post concerns primarily the nerdly arts, so feel free to skip it if that's not something you're interested in.]

So it's taken a little while to figure out how best to put me to use, and that is going to be in two areas: first, teaching some introductory computer courses for hospital staff: very basic stuff for those who have used computers very little or not at all, and a bit more advanced for those with some experience or who use them day to day but want to learn a bit more about particular applications, etc. Second, being a jack-of-all-computer-trades, assisting with various issues around the hospital. At the moment, the latter means banging away at an existing MS Access database. You database weenies will recognize the symptoms: Access used as a big Excel spreadsheet, without any validation of entered data, and Excel reports for outside organizations generated by running Access queries/filters by hand and copy/pasting the results into Excel. So I'm creating forms to make data entry easier, faster, and more accurate, and reports that make it possible to skip at least one monkey of the current report generation solution.

[In case anyone who's read this far this wasn't at some point in time connected to WGBH Interactive, the monkey scale refers to the number of humans involved in some sort of technical process that really should be completely automated, but for some reason isn't. A three-monkey solution requires three people where ideally there would be none involved, etc.]

Sunday is usually hectic, but what with the strikes late last week, this Sunday was even busier than usual: 400 patients seen in the outpatient clinic, instead of the 300 or so of an average Sunday. But I wasn't involved, much; they've figured out what to do with me, to make the most of my skills while I'm here, and that's going to involve teaching computer classes for hospital staff - very general introductions for those who have had little exposure or experience with computers, basic Microsoft Office skills for those with some background. Plus, it appears, a smattering of "we've had this problem, can you take a look at it?" type issues. And yes, laugh all you want, but most of the computers here are running Windows XP of some service pack or other, so this 23-year Macintosh veteran is going to have to bone up on his dark-side skills.

So I spent most of Sunday working on course outlines, as I hadn't arrived packing a complete syllabus, but I did manage to tag along as Dr. Grahame, his wife, son, daughter-in-law, the three Swiss students, Suman, and a driver made their way to the small town of Sukumbasi, a few km away from the hospital. The town is composed of about 40 families, has only been in place five or six years, and is sited on a former riverbed - recently-placed dikes redirect the water during the rainy season and make the area possible for habitation. 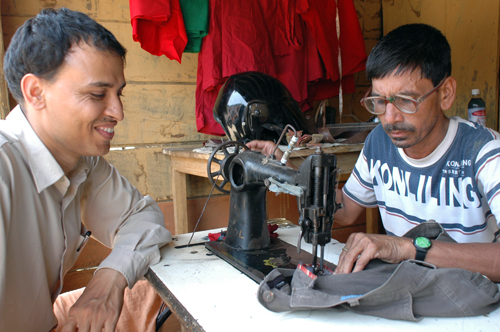 Today has been a slow day at the hospital, most likely due to the strikes (bandh) taking place in Janakpur and other smaller towns that closed the roads to traffic, keeping patients from getting here (the physician in charge of the hospital, returning from Kathmandu today with family, had to talk his way past several roadblocks). So far my attempts to figure out what the strikes are about are met with vague talk of "politics," as it seems no one wants to delve deep into a discussion of Nepali politics, at least with this foreigner.

The previous two days, however, have been full ones, as I've spent both with Dr. Paudel, the orthopedic surgeon. Tuesday is his scheduled day in the operating room, and I was able to join his team as they were getting started on the day's surgeries. First up was not really surgery, technically speaking - for the gentleman who had forearm fractures set with open reduction and internal fixation last week, Dr. Paudel checked the range of motion and whether the fracture remained properly set, which testing would have been extremely painful for the patient had he not been sedated. A 14-year-old boy had a separated shoulder set with an open reduction, two gentlemen had foot ulcers cleaned (and in one case, skin-flapped and skin-grafted), and the last gentleman had a small piece of glass under the skin of his forehead he wanted removed. He had been warned that it was so small we might not be able to find it, and that turned out to be the case.


Follow @bkootsey
Search This Site
Speaking
EVEN DAN FLAVIN WOULD WANT HIS KIDS TO TURN THE LIGHTS OFF BEFORE LEAVING A ROOM
—Jenny Holzer, Mom